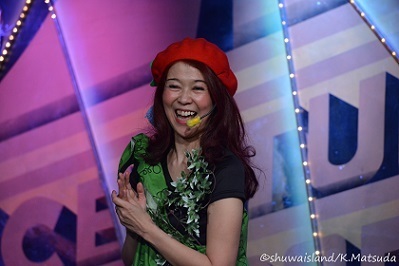 With her back to the stage, group representative Ruruka Minami, 53, was dancing in the very front row of the audience. The group includes deaf people, and Minami’s role is to convey the timing of the performance to them.

After the roughly two-hour concert, Minami said with feeling, “We made it this far thanks to the help of all the staff, who feel so strongly about using sign language not just as something related to social welfare, but also as entertainment.”

The troupe celebrated the 25th anniversary of its founding late last year.

Soon after Minami entered the Osaka University of Arts, while various clubs and circles competed all over campus to recruit new members, she saw a group putting on stage shows with sign language.

“It’s like creating art, writing words in space,” she thought. She was enchanted by the beautiful hand movements and asked the group to teach her.

Visiting the circle, Minami signed while looking at the Japanese alphabet and its corresponding gestures. This was her first foray into sign language. Moved by the fact that she was able to convey her meaning, Minami immediately joined the group.

The circle had about 30 members, of whom about 10 were deaf. Spending most of the day together, Minami worked hard to pick up sign language. What was most useful were the “arguments” they would have.

When Minami and someone else would fall out over something trivial, on returning home she would say to herself, “If they say this to me, I’ll say this back,” repeating a hypothetical dialogue in sign language, and then later arguing in real life.

Perhaps due to the influence of her parents, who lived abroad for many years, Minami feels uncomfortable with the Japanese habit of often not fully expressing one’s own ideas and opinions. But deaf people are different. “They have a strong tendency to tell you just what they’re feeling. My encounter with sign language might have been a gift from God,” she says she felt.

After graduating from university, Minami began working in Tokyo in 1985 producing radio programs. She also served as a sign language interpreter.

One day, Minami interpreted for a singer during a live concert. At the end of the performance, the singer seemed irritated and said, “Even though it was my concert, you were the one that stood out!” Minami was outraged, thinking, “What an ignorant person!” but she also thought that from a production standpoint, it might not work for the interpreter to share the stage.

When Minami signed for a performance by a professional kodan storyteller, a deaf woman in attendance told Minami that she had been moved but also said, “Looking back, I don’t remember the storyteller at all. I just remember your face.”

These thoughts led Minami to take on the challenge of sign-language performance.

The group’s first performance was in December 1989. With a total of three members, including one deaf person, they performed at a little venue in Suginami Ward, and presented Christmas songs with their signed words and dancing.

They had an audience of 25 people, composed of deaf people and people learning sign language. “The sign language performance was great,” people said, and their reputation spread little by little to people who didn’t know sign language.

The environment surrounding sign language has gradually changed. In 1989 the then health minister authorized the creation of the official qualification “sign-language interpreter.” In 2013, Tottori Prefecture enacted an ordinance aimed at promoting sign language.

There are also movements that urge local governments to adopt “sign-language ordinances” regarding the provision of sign-language services in the administrative sphere.

It is no longer surprising to see a deaf character in a TV drama, and Minami has seen an increase in requests to provide sign-language coaching to actors. Just being around her deaf friends, who have experienced discrimination again and again, she can feel the changing of the times.

The Shiki and Takarazuka theatre companies have their own exclusive theaters. The 40-member Shuwa Performance Kiirogumi group’s next objective is to have its own theater.Speech